Credit and fiscal multipliers in China 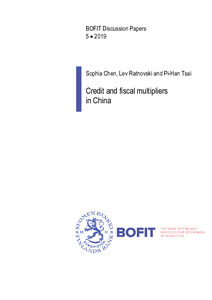 We estimate credit and fiscal multipliers in China, using subnational political cycles as a source of exogenous variation. The tenure of the provincial party secretary, interacted with the credit and fiscal expenditure used in other provinces, instruments for provincial credit and government expenditure growth. We find a fiscal multiplier of 0.75 in 2001-2008, which increased to 1.2 in 2010-2015, consistent with higher multipliers in a slower economy. At the same time, a credit multiplier of 0.2 in 2001-2008 declined to close to zero in 2010-2015, consistent with credit saturation and credit misallocation. Our results suggest that credit expansion cannot further support economic growth in China. The flip side is that lower credit growth is also unlikely to disrupt output growth. Fiscal policy is powerful, and can cushion the macroeconomic adjustment to lower credit intensity.