The microeconomics of innovation : Oligopoly theoretic analyses with applications to banking and patenting 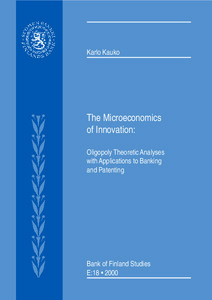 The innovation activities of companies has long been a topic of interest in economics. Game theory models of oligopoly have since the start of the 1980s played a central role in the economics of innovation.In this study three game theory duopoly models are presented and each is used to analyse the firm's R&D activities.

The first model is used to examine the variables that affect the incentives of banks providing payment services to develop an interbank payment system. A customer of a large bank may be in an advantageous situation in that most of his payments will be effected in that bank's internal payment system, which is more reliable and otherwise superior to the interbank system. A key result derived from the model is that provision of payment services free of charge to customers often results in a distortion of banks' incentives to develop the system. A smaller bank will overinvest in the system in order to improve its relative competitive position. Because system improvement would only weaken the large bank's superior position, it will not have a strong incentive to improve the system.Since only one of the model's two banks is investing in the quality of the system, the investments will generally not be cost-effective. If fees are charged for payment services, the distortions in incentives are less serious, even though it is often the case that both banks overinvest in the system. When model results are compared to historical situations regarding payment systems, a number of consistencies are found.

The third model is used to study patenting decisions by a company that has made an innovation. A company can monopolize its innovation by either patenting it or keeping it secret. Patenting is the only viable option if a competitor independently comes up with the same innovation. A patent application, by contrast, is a public document, the contents of which are useful to others who would like to develop substitute products. Patenting is thus not advantageous unless the competitor is likely to come up with the same innovation independently. This means that a company will be the more inclined to patent an innovation, the more its rival invests in R&D. A risk-averse company is more inclined to patent than a risk-neutral one. This model is generally supported by empirical findings.